BOYS DO IT AGAIN!  Varsity and JV win the County Titles!

Cougars take third consecutive team title
By George Pohly of the Macomb Daily
@GPohly on Twitter
A new king joined an old one at the Macomb County boys cross country championships.
Ninth-grader Jack Wilson of Romeo won the individual title and Dakota made it three consecutive team championships at Stony Creek Metropark on Saturday.
Wilson ran the 3.1-mile Baypoint Beach course in 16 minutes, 14 seconds and Dakota bunched five scorers among the first 19 runners to the finish line on a sunny morning.
“They ran well; you can’t ask for anything more,” Dakota coach Mike Timpa said of his athletes. “The guys stuck to the plan. They ran together. They ran hard. Things fell into place as planned.
“We’re pleased.”
Dakota ran at the Portage Invitational last weekend against several top teams from around the state.
Timpa said before that meet that the Cougars were willing to risk not being at their best for the county championships because they wanted to gauge their progress against keen competition.
It turned out the Portage experience didn’t hamper the Cougars as Stony creek.
“I think it made the guys even hungrier,” Timpa said. “Portage gave us some perspective on a state-wide scale.”
Chase Fedolak, who finished third behind Wilson and Fraser’s Steven Stine, led the Dakota scorers.
Mitchell MacDonald, fifth; Joshua Jaster, 10th; Thomas Szymanski, 17th, and Zachary MacDonald, 19th, also scored for the Cougars, who’ve won five county championships since 2009 and finished third or better every year since 2008.
“They work hard, they stick together as a team, and these are the results,” Timpa said.
Romeo finished in second place for the third year in a row. Eisenhower was third.
Wilson hasn’t run the full season because of injuries, Romeo coach Mike Buslepp said.
But the brother of former Romeo standout and current Syracuse University runner Emma Wilson has put together a strong stretch of late, including a 16:12.66 clocking in the Legends Classic at Huron Meadows Metropark in Brighton on Oct. 1.
“It gave me a lot of confidence,” Wilson said.
Wilson was hugged by members of Romeo’s girls team and fans as he exited the finish chute.
“He’s an incredible talent,” Buslepp said. “He’s the toughest kid I’ve ever met.
“He was struggling at the beginning of the season because he was pressing, putting too much pressure on himself. We had to scale things back a bit.”
A mile into the 3.1-mile race at Stony Creek, Wilson looked like a potential winner, Buslepp said.
“He looked really smooth, he was smiling,” the coach said. “He had that determination. He was kicking things over very, very well, and at that point everyone else was hurting.
“He wasn’t hurting at all.”
Wilson finished two seconds ahead of Stine and seven ahead of Fedolak.
“It was hard,” Wilson said of the race. “I was supposed to go out comfortable for the first mile and then chase everyone.”
He was in the lead with a mile left and sensed competitors stalking him.
“I could feel them breathing down my neck,” he said.
Nick Behring, Jarrett St. John, Andrew Goodrich and Charlie Wilson, Jack’s twin, also scored for Romeo. All are 11th-graders or younger.
Logan Hefferan, Zac Truman, Brennan Brothers, Brian Jones and John Burke scored for Eisenhower. Hefferan and Brothers are seniors.
Coaches designate the top 21 runners as All-Macomb County.
Runners 1-7 were First Team, 8-14 Second Team and 15-21 Third Team.
Jack Wilson, Stine, Fedolak, Jalen Smith of Fraser, Mitchell MacDonald, Hefferan and Dylan Hanson of Ford made First Team.
Mike Burley of Sterling Heights, Behring, Jaster, Truman, Jacob Schaldenbrand of L’Anse Creuse North, Evan Tonn of Lakeview and Gabe Garbarino of Utica achieved Second Team.
Michael Zedan of Anchor Bay, Alex Towianski of Ford, Szymanski, St. John, Zachary MacDonald, Omar Uddin of Sterling Heights and Alex Tonn of Lakeview made Third Team.
Garbarino, Alex Tonn, Behring, Fedolak, Burley, Schaldenbrand, Evan Tonn, Stine, Zedan, Jaster, Hefferan and Mitchell MacDonald also made all-county in 2015. 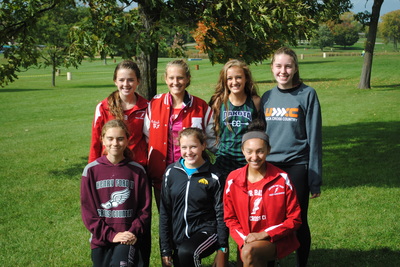 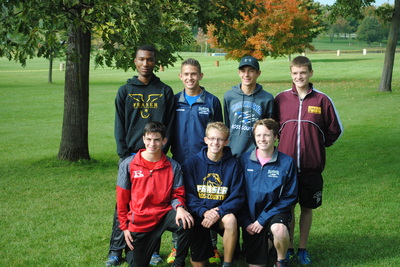 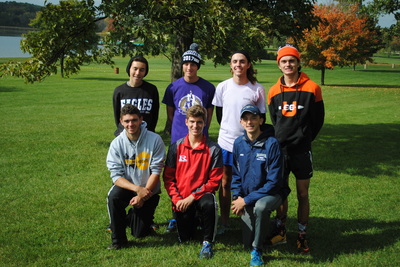 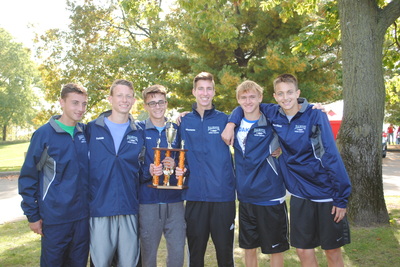 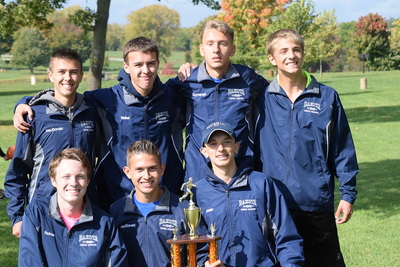 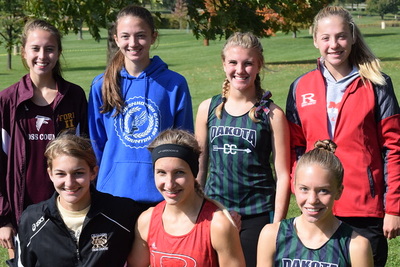 Worlds will collide at the Macomb County cross country meet.
Runners from various leagues like the Macomb Area, Catholic and Blue Water Area converge Saturday at Stony Creek Metropark to determine individual and team champions.
Boys will race at 10 a.m. and girls at 10:45 on the 3.1-mile course at Baypoint Beach.
A two-time girls champion and a slew of returning all-county boys provide some of the storylines for the annual event in Shelby Township.
Karenna Duffey of L’Anse Creuse North was an individual champion as a ninth- and 10th-grader.
The junior won both MAC Red Division jamboree races and the Hansons Invitational this season, and she’s No. 1 in the latest county rankings.
“It’d be great to have a ‘three-peat,’” Duffey said. “Hopefully I can do that. I think it’s possible.”
Duffey’s challengers could come from fellow MAC Red runners like Hannah Toner and Madelyn Malczewski of Romeo; Hannah Faustyn of Dakota and Lexie Jorgens of Eisenhower.
Other runners to watch include Elisabeth Pettibone of MAC White member Ford; Catholic League standouts Amanda Wood of Lutheran North and Betsy Lueck of Regina, and Alaina Carroll of BWAC member Armada.
Boys runners who finished in places 2-11 at the 2015 county meet are back.
Among them, Gabe Garbarino of Utica and Chase Fedolak of Dakota won a MAC Red jamboree apiece; Steven Stine of Fraser won two MAC Blue jamborees, and twins Alex and Evan Tonn led Lakeview to a 12-0 record in MAC Blue dual meets.
Ford’s Dylan Hanson finished 41st at the 2015 county meet, but the junior has worked his way into the top five in the county rankings.
Dakota and Eisenhower shared the MAC Red dual-meet championship, and those teams are ranked 1-2 in the county.
Mitchell MacDonald, Joshua VanSlambrouck, Zachary MacDonald and Joshua Jaster help round out the lineup for Dakota, which is No. 11 in the state Division 1 rankings done by MichiganCrossCountry.com.
For Eisenhower, Logan Hefferan and Brennan Brothers were all-county in 2015. They’ve led the Eagles this season along with Zac Truman, Brian Jones and Brian Burke.
De La Salle finished fourth in Division 1 at the Hansons Invitational at Delia Park in Sterling Heights on Oct. 1. Nathan Jarski and Chandler Witt led the Pilots’ charge in that meet.
Peter Freeman, a returning all-county runner, and Aaron Wood finished 1-2 to pace Lutheran North to first place at the Catholic League Division 2 jamboree at Cranbrook on Monday. The Mustangs’ Noah Starkey was fifth in that race.
Dakota was the 2015 county team champion, and Lutheran North was the Division 2-3-4 champ.
Coaches designate the top 21 boys runners and top 21 girls as All-Macomb County.
Runners Nos. 1-7 will be First Team all-county, 8-14 will be Second Team and 15-21 Third Team.
Team trophies and all-county honors are to be presented at an awards ceremony that begins at 1 p.m.
Eisenhower was the girls team champion and Regina the Division 2-3-4 champ in 2015.
Romeo won the second of two MAC Red jamborees this season with a team that included senior Julia Knepper, and the Bulldogs are ranked No. 1 in the county.
Anchor Bay and Ford both went 9-3 in MAC White dual meets.
Regina is 13th in the state Division 2 rankings by MichiganCrossCountry.com.
These seven schools have won girls championships since the first meet in 1978: Chippewa Valley, Cousino, Lakeview, Stevenson, Eisenhower, Utica and Romeo.
Dakota will be running for a third consecutive boys title. The Cougars also won in 2009 and 2010.
These 15 schools have won boys championships since 1970: L’Anse Creuse, Mount Clemens, Cousino, Ford, Tower, Stevenson, Warren Woods-Tower, Eisenhower, East Detroit, De La Salle, Sterling Heights, L’Anse Creuse North, Utica, Romeo and Dakota.