By Chuck Klonke
@MIPrepZoneMD
It was a case of been there, done that for Dakota’s boys cross country team and L’Anse Creuse North sophomore Karenna Duffey at the Macomb County Cross Country Invitational.

On the other hand, first-place finishes at the county meet Saturday at Stony Creek’s Baypoint Beach were new experiences for Eisenhower’s girls team and Romeo senior Adam Fraeyman.

Dakota, which placed its first five runners in the top 21, won the boys overall championship with 72 points. Romeo was second with 81 and Utica finished third with 104 points. Lutheran North won the boys team championship for the Class B-C-D schools with 287 points.

Fraeyman, who was sixth in last year’s county meet, covered the course in 15:53, to finish 23 seconds ahead of LCN junior Thomas Michno.

Eisenhower had four of the top 17 runners in the girls race to finish with 72 points. Regina, which won the championship for the smaller schools, was second with 84 points. Defending county champion Stevenson took third place with 102 points.

“They did fantastic,” said Eisenhower assistant coach Brad Quinn, who was filling in for head coach Debbie Palazzolo who missed the meet because of an illness in her family. “We had a plan we worked on throughout the week and they went above and beyond the plan.”

A year ago the Eagles finished second.

“It’s just an awesome feeling to finish first because it’s my senior year,” said Brianna Mozariwskyj, who was ninth overall. “It feels like the four years of hard work finally paid off.”

Fraeyman gave credit to coach Mike Buslepp for his performance.

“My coach really set us up well to run well today,” Fraeyman said. “He actually tapered me a little bit. I had been wanting to run faster this week but he told me to trust the system. The system definitely worked for me today.

“I went out hard the first mile and just held on for the rest of the race.”

Dakota has shown balance all season and Saturday was no exception.

“The key was the same as it has been all season,” said Cougars coach Mike Timpa. “Our kids run as a pack. We don’t have a front-runner but when you have six guys within sixth place and 22nd it’s going to be tough to beat us.”

Chase Fedolak led the Dakota contingent with his sixth-place finish and was one of five Cougars to earn all-county honors.

“We have a lot of guys available to step up when needed,” Fedolak said. “Everyone has each other’s backs. If one person is running bad, another one will be running well. We’re all usually around the same time.”

Duffey said that this year’s win was a little more difficult than last year when she won by a margin of 29 seconds. This year she finished 11 seconds ahead of Romeo’s Emma Wilson.

“She’s a talented runner but you can say that for pretty much everybody,” Duffey said.

Duffey’s time of 17:44 matched last year’s winning effort in the county meet, but when the coaches measured the course last year it fell slightly short of five kilometers.

“So this year I really ran faster than last year, even though the weather was a little less favorable,” Duffey said. “That’s always a nice thing, too.”

Duffey said she used the same strategy that carried her to a first-place finish at the second Macomb Area Conference Red Division jamboree.

“I was supposed to stay 10 meters behind the leader until about a quarter of a mile was left and then go for it,” she said. “Emma seemed to drop off a little after that.”

Saturday’s performance was just another strong effort in what has been an outstanding season for Regina.

“I thought they ran well,” said Saddlelites coach Gregg Golden. “There are a lot of good teams with a lot of terrific runners. I think five of our seven varsity runners had their season-best times. You have to be happy with that.

“Eisenhower ran great. You have to give them credit. Second-place overall is OK. We’re pleased with winning our division.”

Lutheran North’s boys have usually taken a back seat to the Mustangs girls, however, this year the boys have some bragging rights after taking first among the smaller schools.

“A solid two through five was the difference,” said North coach Steve Slagel. “I knew we had a front runner in Peter Freeman. Two through five aren’t all-county but they’re solid runners and they make a difference in a big meet like this.” 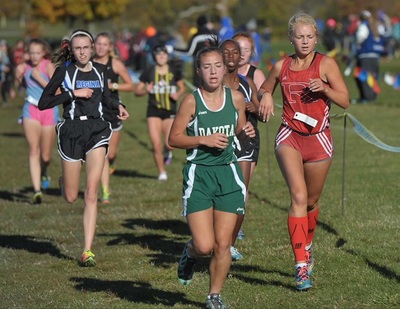 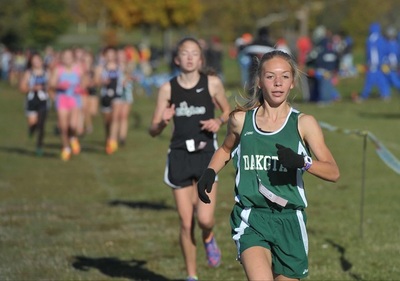 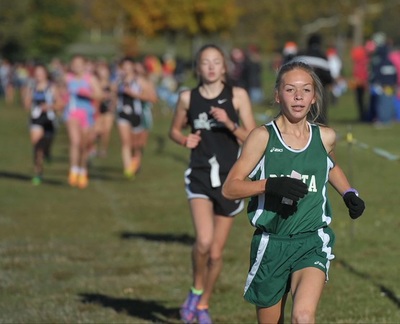 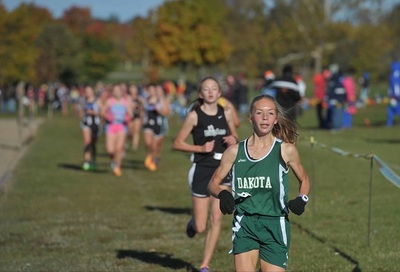 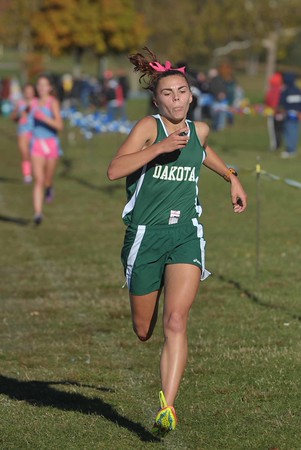 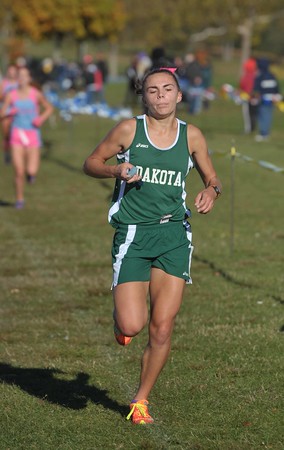 Photos by the Macomb Daily

Team champs, all-county runners to be determined at Stony Creek
By George Pohly
@GPohly on Twitter
League jamboree meets and weekend invitationals were relative warmups compared to what lies ahead for cross country runners.

At Stony Creek Metropark on Saturday, girls and boys individuals and teams will compete for honors at the annual Macomb County Championships.

Regina, Eisenhower, Romeo, Dakota, Stevenson, Lutheran North, Ford and Anchor Bay should be among the girls teams to beat, based on results so far.

Stevenson won the championship in 2014, and Lutheran North was the county Division 2-3-4 champ.

“We want to gun for the top three,” said Pavicic, whose Stallions tied Lakeview for the MAC Blue dual-meet championship.

Adam Fraeyman of Romeo has been among the stronger runners in the county so far.

Juniors Thomas Michno of L’Anse Creuse North, Mike Burley of Sterling Heights, Steven Stine of Fraser, Gabe Garbino of Utica, Chase Fedolak of Dakota and Brennan Brothers of Eisenhower have also been among the county leaders.

The top three finishers in the 2014 race graduated.

Team trophies and all-county honors will be presented at an awards ceremony that begins at 1 p.m.

State finals will be Nov. 7 at Michigan International Speedway.